Lessons from a Bump in the Dark 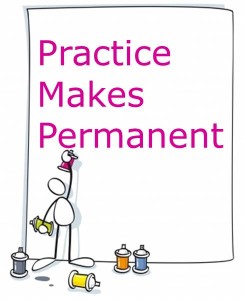 One night while parked on a dark one-way street, minding its own business, my car got hit.

Fortunately I wasn’t part of the bang-up. But when I saw my bumper wrenched a good three inches off the front of the car … well, what popped out of my mouth isn’t fit to print here!

It was easy to guess that someone had turned the wrong way onto the street, crashed into my car, and yanked the bumper off as they backed up.

But what I didn’t guess was that this bump in the dark would show me how quickly I could form new habits … and how easily I’d slide back into old ones.


My car was a mess. It spent a month in the body shop and I spent four weeks driving my husband’s car. And that’s when I conducted my unexpected Habit Experiment.

The thing about operating a car is that, other than paying attention to the road, it’s mostly a series of habits you do without thinking: unlock the door, put on your seatbelt, start the ignition, shift gears, signal a turn.

At least that’s true in a car you regularly drive.

Get into a car you’re not used to, though, and you’ll find your car-operating habits are anywhere from slightly wonky to flat-out useless.

For instance, Warren’s car has a push-button keyless start, whereas mine starts the old-fashioned way, with a key. It took me three days to stop reaching for a non-existent key. But then I settled into the new patterns, and by the second week I felt like I’d been driving his car forever.

It only took two weeks to form effortless new patterns (a.k.a. habits) because I was practicing all the time.

Several trips per day, with the same actions performed multiple times per trip, quickly got me into a groove. In the course of two weeks, I pushed that start button upwards of fifty times. That’s a lot of practice in a short time!

Then I got my car back. Yay!! I hopped into the driver’s seat, reached forward, and …. “Oh, wait, there’s no button to push! Where’s my key?”

But within 24 hours, it was as if I’d never been separated from my car.

It took almost no time to revert back to my old habits because they were much more deeply embedded.


Those fifty pushes on the start button were nothing compared to the thousands of times I’ve turned the key in the ignition.

This same process occurs whether you’re driving a different car, establishing an exercise routine, increasing your self-awareness, learning to be a more effective leader, or any other change.

When you consistently and repetitively practice, new patterns start taking root. However, stop practicing or get inconsistent, and you’ll slide right back into your old patterns.

What goals are you working on?

Just as operating a car consists of a series of actions and routines, so does achieving your goal or creating a change.

So use the following four-step process to turn your new actions and routines into habits so you can set yourself up for sustainable success.

Practice will never make perfect. But practice does make permanent. And that, my friend, is what makes change sustainable.

Posted in Getting Unstuck