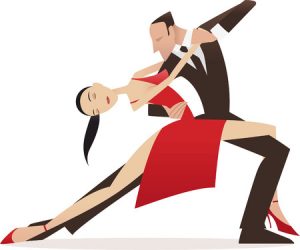 When my friend Jennifer signed up for ballroom dance lessons in early 2017, she wasn’t expecting to end the year with a ballroom-sized life lesson.

Dance lessons had been on Jennifer’s bucket list for years. But she’d never given herself permission to take action – to find a studio, sign up for a class, and to go solo if necessary.

That changed a year ago. Fresh off a recovery from back surgery, Jennifer showed up at the Savannah Ballroom Dance Studio for her first lesson. And she quickly fell in love with the place, the people, and the dancing.

She was having a blast and discovered an innate talent for dancing.

And yeah, she wondered why she hadn’t said yes a lot sooner to something she’d wanted for so long. (Most of us have a similar story about waiting!)

Ten months in, her instructor told her she was ready to enter a competition. Jennifer told him she absolutely was not ready. And he said, “No one ever thinks they’re ready. If you wait until you think you’re ready, you’ll never do it.”

Here’s what you need to know about Jennifer: she’s a perfectionist of the highest order. Making a commitment to something this far out of her comfort zone is not her norm!

But to her surprise, she did say yes. YES to getting out of her comfort zone, YES to doing something beyond what she’d imagined, and YES to having the guts to say yes. (This is the stuff bold moves are made of.)

December arrived and so did the 4th annual 2-day North Florida Dance Challenge competition. Jennifer was petrified. And here’s what she told me about the first few moments of her first dance: “I decided to stop worrying about making a mistake and just dance and have fun.”

Words to live by.

With her eleven year-old daughter in the audience, Jennifer competed in 24 dances, including the foxtrot, waltz, swing, tango, cha-cha, and rumba.

The results: eleven first places and nine second places. None of which could have happened without three critical – and scary – choices:

Showing up, saying yes, and letting go of perfection has rocked her world. And it’s spilling into other parts of her life. As one of my clients says, “When you’re bold in one part of your life, it’s easier to be bold in other ways.”

Where are you holding back because you don’t think you’re ready?

To quote a very wise dance instructor, “If you wait until you’re ready, you’ll never do it.”

It’s time to stop waiting and start moving towards what you want – step by step, choice by choice. There’s no other way to make a bold move or to find your intersection of success and happiness.

Opportunity dances with those who are already on the dance floor. ~ H. Jackson Brown, Jr.